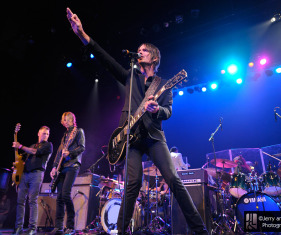 Walking Papers is a blues-rock band formed by Jeff Angell and Barrett Martin, two long-serving veterans of the Seattle music scene. Jeff previously sang and played guitar for the bands Post Stardom Depression and The Missionary Position, and Barrett, a drummer and multi-instrumentalist, played for grunge pioneers Skin Yard and Screaming Trees, as well as the super groups Mad Season and Tuatara.

The band played its first Seattle shows initially as a duo, but soon added Duff McKagan on bass to make their official debut as a trio on July 22nd, 2012. Benjamin Anderson brought his keyboard talents from the studio to the live stage, evolving the band into a quartet. Pearl Jam and Mad Season guitarist Mike McCready has been known to make guest appearances on stage as the lead guitar player.

Walking Papers self-titled debut album features a stellar cast of musicians and the band shows that a great song can be conveyed with thundering drums, rumbling bass, and a howling guitar just as easily as it can with percolating marimbas and shimmering vibraphone. The songs can stand alone as individual stories, but taken together as a whole, they convey a much larger narrative with tales of wandering souls, the collisions of will, and the dark beauty of the American heart.