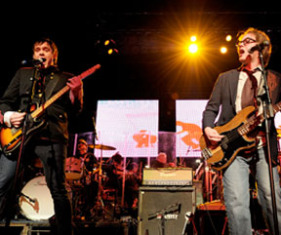 Tennis Pro is from Seattle whose music has been described as Indie Power-Pop. Melody and Anarchy. The band consists of: Sean Lowry (drums), David Drury (guitar/vocals), and Phillip Peterson (bass/vocals). In October 2010, Tennis Pro joined forces with filmmaker John Jeffcoat (Outsourced, $5 Cover) and put a call out to its fan base, raising over 11 thousand dollars in 21 days on kickstarter.com to launch production of “Big in Japan”, a movie chronicling the band’s journey from Seattle, Washington to Tokyo, Japan. Tennis Pro wrote and recorded a new record SHIMOKITA IS DEAD? (its fourth full-length offering). Recorded at Two Sticks Audio and The House of Breaking Glass and produced by Don Gunn, the album is slated for a May 2011 release. Steve Fisk, ( Nirvana, The Posies, Screaming Trees, Soundgarden, Harvey Danger) mixed several tracks, as well Greg Williamson (Sunny Day Real Estate) and Gunn. The band will launch its first tour of 2011 in Japan which will be the band’s second tour of the country. www.tennispromusic.net