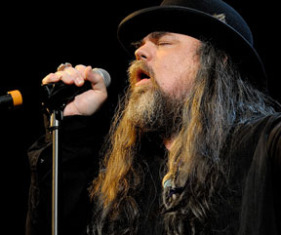 Shawn Smith is a Seattle-based songwriter, powerhouse vocalist and musician in several bands (Brad, Satchel, Pigeonhed, All Hail The Crown) and a prolific solo artist. He was born in Spokane, Washington and has cited Freddie Mercury, Prince and KISS as early influences. Other influences he has noted are Steven Tyler, Bon Scott, Elton John, Stevie Wonder, Ice Cube, Snoop Dogg, Andy Wood and Chris Cornell. It is easy to hear the impact of all of these varied performers in Smith’s various projects. Smith’s contacts and projects are was wide-reaching as his influences and he also has worked with Thaddeus Turner (formerly of Maktub and many other projects including Brad) under the name Forever Breakers. His songs have been included in television (ER, The Sopranos) and soundtracks (Coyote Ugly), and he performed on national television shows such as Jimmy Kimmel Live!