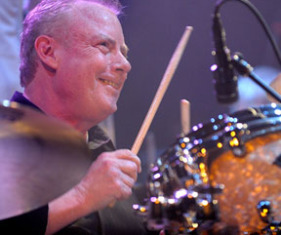 Carlos Santana is known for blending disparate musical influences into a harmonious whole: rock, blues, latin and jazz. And in part, young drumming phenom Michael Shrieve (played a part in introducing Carlos to the music of cutting edge jazz artists. As one of the youngest performers at Woodstock (just 20 when Santana played their groundbreaking set), his musical vision and talents were far beyond his years. There was no blueprint for the “trap” drummer fitting in with percussion players, yet he introduced a staggering array of complicated, jazz-influenced patterns that not only complemented, but enhanced the syncopated percussion. He soon moved into composition and production on Santana’s experimental Caravanserai album, on which he wrote or co-wrote four of the 10 tracks and co-produced. His production skills appeared on Santana III, Welcome, and Borboletta as well.

After recording more than half a dozen albums with Santana, he formed Automatic Man with rock guitarist Pat Thrall, worked with fellow Santana bandmate Neal Schon in the supergroup HSAS (vocalist Sammy Hagar, guitarist Schon, bassist Kenny Aaronson), and with the Santana-esque group Abraxas Pool. Shrieve has collaborated with Roger Hodgson (Supertramp), Andy Summers (The Police), Buckethead (underground guitar hero) among others and has been involved with film composing, writing for Paul Mazursky and David Lynch. His current band, Michael Shrieve’s paSpellbinder, specializes in the avant garde jazz style that he helped Santana pioneer, and he is working on a book of legendary jazz drummer Elvin Jones memoirs. Shrieve is the past President of the Pacific Northwest Branch of the NARAS and is musical director for Seattle Theater Group’s “More Music @ The Moore”, a program that highlights gifted young musicians from Seattle’s various cultural groups. In 1998, Michael Shrieve was inducted into the Rock and Roll Hall of Fame; in 2005, he received the Guitar Center’s first annual Lifetime Achievement Award; and in 2011 Rolling Stone Magazine Reader’s Poll named him in the Top 10 Drummers of All Time.