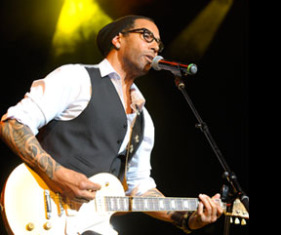 LeRoy Bell’s family legacy extended from Philly to Seattle when Thom Bell, LeRoy’s uncle opened up the west coast offices of Mighty Three Music in the late 70’s with Kenny Gamble and Leon Huff. As a young staff writer LeRoy co-wrote songs that would be recorded by The Spinners, The O’Jays, The Temptations, Rita Marley and most notably Elton John. John quickly became a fan of LeRoy’s songwriting and his recording of Bell’s “Mama Can’t Buy Me Love” topped the Pop, R&B and A/C charts in 1979 and earned John a Grammy nomination for Best Male R&B Vocal Performance. That same year, Bell and co-writer Casey James had their own million-seller with “Livin’ It Up (Friday Night)” on A&M Records. 2003 brought new life for LeRoy as the Fat Boy Slim mix of Elton’s “Are You Ready For Love” – penned by Bell – reached #1 in England and most of Europe. LeRoy reinvented himself emerging as a singer/songwriter and releasing the acclaimed EP “Spending Time” on his own label Martez Music Group. He then released “Two Sides to Every Story”, and his career was officially re-born. Having performed with artists ranging from B.B. King, Sheryl Crow, Michael McDonald, LeAnne Rimes, Keb Mo and many others, LeRoy has grown as a touring artist, and the experience has given his music an edge that places him in a league of performers creating a sound that crosses many demographics. www.leroybell.com