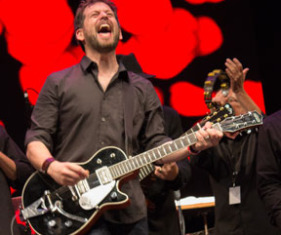 Justin Davis has been a guitar player since he was twelve years old. Aside from a powerful hope to one day play Major League Baseball (a hope that was all but extinguished by the time he was 16), a guitar player is the only thing he’s ever wanted to be.

In December 2012, Davis began recording a new solo album to be released in 2013. Outside of that effort, his focus is on his new band, Strong Suit. From 2006-2012, he played lead guitar and wrote songs with Star Anna and the Laughing Dogs and has performed alongside some of the biggest names in rock, including Pearl Jam’s Mike McCready, Guns ‘N’ Roses/Loaded’s Duff McKagan, Soundgarden and Pearl Jam drummer Matt Cameron, Pearl Jam/Brad’s Stone Gossard, Alan White of YES and the Plastic Ono Band, Howard Leese of Heart, Nirvana’s Chad Channing, the Seattle Symphony, Blues Traveler’s Brendan Hill and many more. Davis holds a degree in classical guitar performance from Central Washington University, studied jazz performance at Cornish College of the Arts, and flamenco guitar withMiguel Serrano in Salamanca, Spain.

Since 1998, he as taught private guitar lesson and currently maintains two active locations, one at the Island Music Guild on Bainbridge Island, and at his studio in Seattle’s Georgetown neighborhood. He notes of this, “Teaching always reminds me that music is a gift. When a student reaches past a previous goal, writes a first song, or their eyes light up with a sudden new understanding, it makes everything feel new again for me too. I’m incredibly grateful to be able to teach and share with my students.”