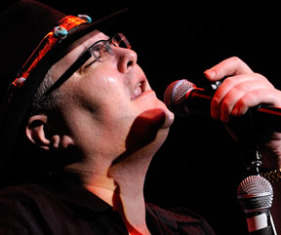 John Popper is the frontman of rock band Blues Traveler performing harmonica, guitar and vocals. He is widely considered a harmonica virtuoso, and is listed by harmonica manufacturer Hohner as a “Featured Artist”, an accolade reserved for only the best and most successful harmonica players.

His band Blues Traveler had breakout and mainstream success with their fourth album, titled four which was released in late 1994. The catchy pop single “Run-Around” became a popular hit and was followed by the snappy number, “Hook”. “Run-Around” won a Grammy Award and broke a record for most weeks on the chart.

The charismatic and witty Popper is also most known for his legendary live performances and a fan base that has followed the vocalist / harmonica virtuoso and the band with an almost religious fervor. The band will be on tour this summer. Blues Traveler’s next album is due out in 2012 as the band kicks off its 25th anniversary tour.