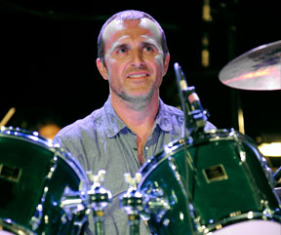 Drummer Brendan Hill is one of the original members of Blues Traveler. In 1983, while attending Princeton High School in the Borough of Princeton, New Jersey, Hill met harmonica player John Popper and together they formed the predecessor to Blues Traveler, Blues Band, and began playing with guitarist Chan Kinchla and bassist Bobby Sheehen. The musicians moved to New York City after graduating, and Blues Traveler quickly earned a local reputation for its high-energy, heavily improvisational live show with Popper’s soulful singing and flamboyant harp-blowing matched by Kinchla’s inventive combustible guitar work and the rhythm section’s propulsive punch. Blues Traveler went on to make its mark in American rock history as a forerunner of the Jam Band movement with eight studio album, four live discs – six of which certified Gold or Platinum — and a combined worldwide sales of more than ten million units. The band’s best-known single, “Run-Around,” was the longest-charting radio single in Billboard history. And along the way, the band has played more than 2000 live shows in front of more than three million people.