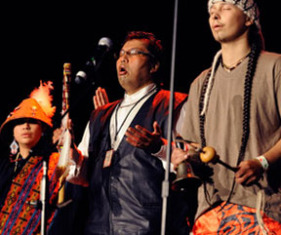 Rev. Fred Beaver Chief Jameson, 46, was a member of the Lummi Nation, a spiritual leader, musician, and social activist who worked among Seattle’s Native American community and also in the local art and music scenes. He lectured across North America and Europe; he’d married a Swiss woman and was planning to move to Zurich. He was the Seattle School District’s Native American liaison in the ’70s. He led drum circles and made recordings of Northwest Coast Salish music, including the 1999 CD Red Cedar Medicine Circle Songs. One of Jameson’s friends in the music community, Sky Cries Mary founder Roderick Romero, said he was “the most significant native of this area that I’ve encountered. His whole purpose was to bridge the indigenous culture and that of what he called ‘the settlers,’ and try to heal the pain.” In the local pagan publicationWiddershins, writer Amanda Silvers called him “a wise man, teacher, healer, singer, storyteller and all-around funny guy who is very serious about spirit.” In his book A Handbook for Human Beings, Jameson said about himself: “I am a bridge. A bridge to help you understand our culture and combine it with your own…. NOT to replace it, but to combine it.” He died of a sudden aneurysm on June 8 at the Queen Anne post office.