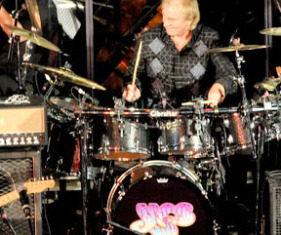 Grammy Award-winning musical legend White, who makes his home in Seattle along with his wife Gigi, is best known for his thirty-four years of work with the progressive rock band Yes. Alan’s work with Yes spans decades and can be heard on dozens of smashes like “Owner of a Lonely Heart,” “Roundabout,” “I’ve Seen All Good People,” and “Leave It.” In all, White has appeared on over fifty albums with artists from John Lennon and George Harrison to Joe Cocker, Ginger Baker and The Ventures. White has now formed the band WHITE and original members include bassist/vocalist Steve Boyce (Merkaba, Two Shed Jackson), and guitarist Karl Haug (Treason), will be joined by new members, vocalist Robyn Dawn (Parallels, Ajalon, Supernaughty), and keyboardist Jonathan Sindelman (Parallels, Ajolan) in a reprise of their performance at Synergia 2010. Supporting the band will be percussionist Reek Havok (work ranging from The Pointer Sisters to Motley Crue). www.alanwhite.net